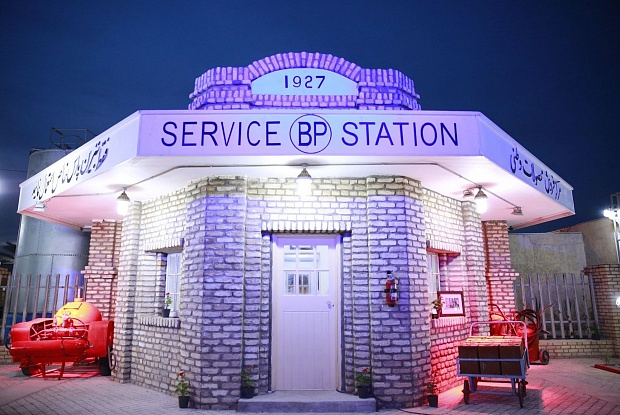 Who says practical things can’t be beautiful? Iran has put its two oldest petrol stations on its national heritage list, making the “monuments” part of the country’s first petroleum museum. But these are no ordinary petrol stations—Fourth Fuel Distribution Station in downtown Tehran, which was built by the Anglo Persian Oil Company between 1925-41, is covered in bright glazed tiles and boasts the same classic Islamic architectural features, including geometric patterns and arches, that can be seen on some of the country’s most spectacular buildings. The other petrol station, which dates to 1927, is built from stone and has strong Art Deco influences, showing the popular British aesthetic at the time. “Unfortunately, a number of old fuel distribution places including gas stations with very peculiar architecture have been destroyed during the time or have been changed for other uses,” says a statement on the museum’s website.

The Fourth Fuel Distribution Station is located in Panzdah Khordad Street in Tehran. (Photo: The Iran Petroleum Museum and Documents)

The Iran Petroleum Museum and Documents, which is located in the southwestern city of Abadan, on the border with Iraq, opened in January this year to document and preserve objects and equipment relating to Iran’s century-old oil industry. The open-air museum includes hundreds of objects from oil tanker trucks, kerosene lamps and oil product containers to historical documents. The museum hopes to add 15 more fuel-related heritage sites to its roster in the future.