New historical discoveries from 1800 years ago in southern Iran 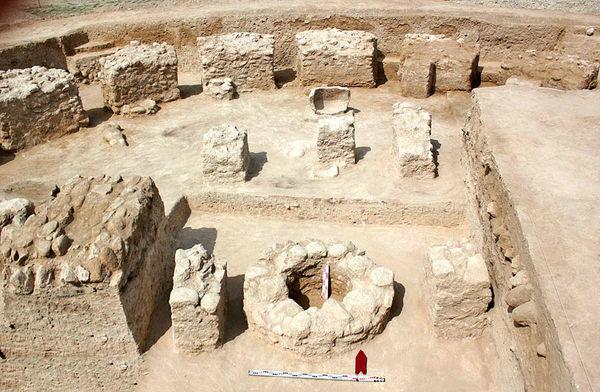 New parts of a historical structure dating back to the Sassanid era (224–651 AD) have been recently discovered during excavations in Tonb-e Pargan, a hilltop site in the city of Bastak in Hormozgan Province.

According to Ali Asadi, head of the excavation team, the site and the monument is located 35 km north of Persian Gulf waters.

The edifice was uncovered after three seasons of excavation in the site, the first of which began last year when traces of a ditch were detected around the mound, ISNA reported.

“Clay pieces, new parts of the already unearthed structure and stone tools similar to prehistoric items earlier found in Tall-e Bakoun in Fars Province, have been among the new discoveries in the third phase of discoveries that began nearly a month ago,” Asadi said.

Studies using a simulated model mapped by experts show that the circular structure was built using 20 same size stone pillars, on which there had been seemingly a dome.

“A circular column made of stone and plaster is artfully placed in the center of the building under the dome,” the expert added.

The building is said to cover an area of 230 square meters and the edifice is circumscribed by an earthen brick parapet.

It had been used until the end of the Sassanid era and was then abandoned.

The exact application of the unique building is not known but possible functions include a space for ritual, astrological or scientific purposes.

“The circular mound of Tonb-e Pargan probably served as part of a greater observatory complex. No similar building has been found in the entire Middle East and North Africa,” the expert noted.

After the second phase of the excavations, a local benefactor named Mansour Abbasi built a protective roof for the discovered structure. According to the Asadi, the newly discovered parts will also be covered in order to be immune from natural phenomena.

“A restoration team will be soon deployed to the site to reinforce the excavated structures and carry out renovations,” he added.

Hormozgan Province has around a thousand ancient historical sites from 5,000 years ago to the Pahlavi era.

The town of Bastak where Tonb-e Pargan is located is 220 Km west of Bandar Abbas.